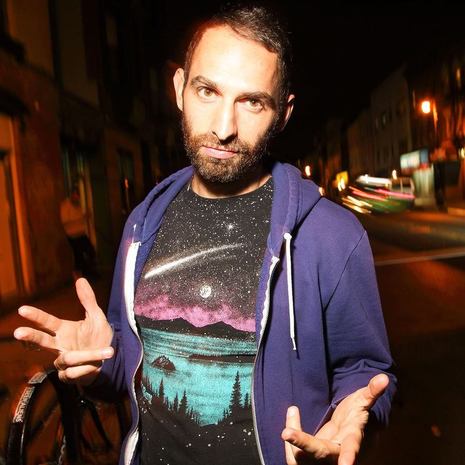 Aaron Weaver started doing stand-up in Chicago in 2008, with a point-of-view so specific, so original, and so hilarious that the rest of the Chicago comedy scene quickly took notice. He rapidly became one of Chicago’s most heralded stand-ups, due to his custom brand of absurd soulfulness and his way of exploring all the smartest and stupidest thoughts that go through all of our heads.

He has performed at the TBS Just For Laughs Festival (twice), as well as the Boston and Bridgetown Comedy Festivals.  Since moving to LA in 2013 he was named one of Comedy Central’s “Comics to Watch” as well as being named one of Last Comic Standing’s “Top 100 Comedians,” and finally he was just named one of LA’s Rising Stars by The Culture Trip.

He currently runs a spiritual comedy experience called Full Moon Comedy at the metaphysical/crystal shop Liberate Hollywood, where each month he leads the gathering in guided meditation. If you’re looking for someone to help raise your vibration, look no further than Aaron Weaver. ​​